In the last 24 hrs, Bitcoin suffered a crash from $60,900 to $50,900Over 1 million traders were liquidated to the tune of $10.2 BillionThe dip successfully closed 2 CME BTC GapsThe closure of the two gaps created another at $62,100 that could also be filled in the future

The last 24 hours have been a tumultuous period in the crypto markets as Bitcoin dropped by roughly $10k from $60,900 to a local low of $50,900. The 16.4% Bitcoin dump in the stated time period caused the liquidation of 1.073 million traders who lost a total of $10.2 Billion as highlighted by the team at Bloqport through the following tweet.

The largest Liquidation was a Bitcoin Order Valued at $68.73 Million

$10.2 Billion in liquidations during a 24 hour time period, is possibly the highest witnessed to date.

Double-checking the liquidation data on Bybt.com reveals that $5.33 Billion lost was through Bitcoin trading positions. Furthermore, the highest loss was a BTC trade worth $68.73 million. Ethereum traders lost roughly $1.16 Billion in trading positions with XRP traders losing $499.23 million as highlighted in the following screenshot courtesy of the tracking website.

Further breaking down the $10.2 Billion in liquidations, $9.26 Billion worth of trading positions liquidated were long positions. Short sellers were liquidated to the tune of $887 Million according to Bybt.com. 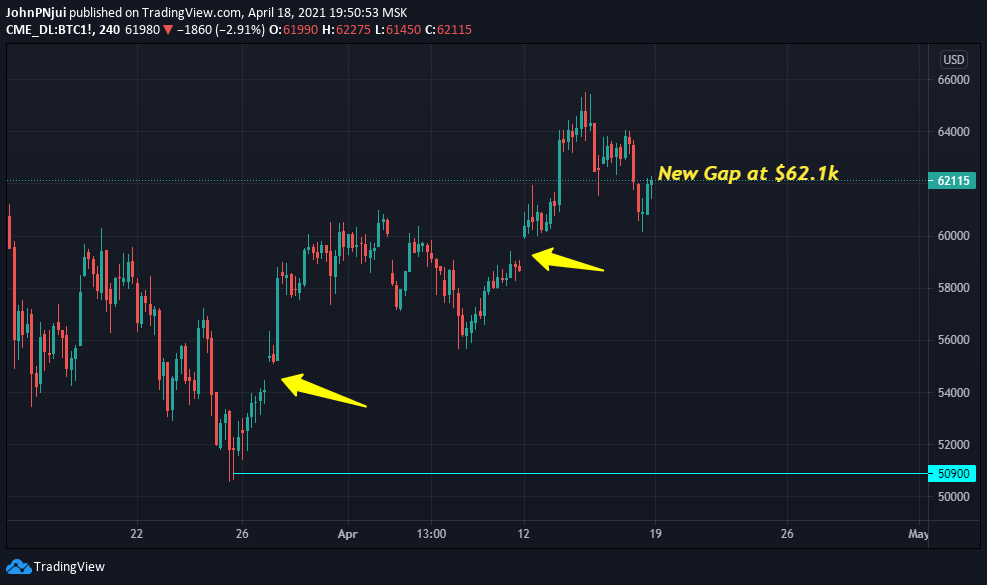 The dip also created a third CME Bitcoin gap back at Friday’s close of $62,115. This in turn foreshadows the possibility of Bitcoin revisiting this price area sometime in the future to fill it. Therefore, Bitcoin could still have some fuel left in the tank to revisit levels above $60k despite the weekly chart hinting of exhaustion.

With respect to the significance of CME Bitcoin gaps, BTC traders have for a while, postulated a loose theory that every gap created on the CME BTC/USD chart, will be filled with time.

Gaps are created when the price of Bitcoin experiences a wild swing during the weekend, thus greatly deviating from the Friday close at the CME exchange and leaving a gap on the chart as seen above.

According to the aforementioned theory by BTC traders, Bitcoin’s price will eventually return to the price level of gap and fill it.