Bitcoin rose to $61,000 Friday as traders eagerly anticipate approval of a bitcoin exchange-traded fund (ETF) in the U.S. Enthusiasm for such an approval contributed to a near 6% jump in BTC’s price over the past 24 hours.

The U.S. Securities and Exchange Commission (SEC) is reviewing around 40 bitcoin ETF product filings and has multiple decision deadlines to make a decision on futures-linked ETFs starting next week. According to Bloomberg, the regulator is expected to approve at least some of them, clearing the way for an anticipated hike in trading to begin.

An exchange-traded fund is a type of security that tracks an index, sector or other asset and can be purchased or sold on a stock exchange like a regular stock. However, what the SEC is likely to approve is a bitcoin futures ETF based on futures traded on the CME exchange. The investor would not hold bitcoin directly, but there are still risks.

“Markets remain healthy, and we expect the rotation to continue as the speculation over a bitcoin ETF intensifies,” crypto investment firm StackFunds wrote in a Wednesday report.

For now, technical analysis suggests bitcoin is at a critical point.

“Traders previously suggested that for bitcoin to enter an extremely bullish phase and go parabolic it would need to break the $59K-$60K level,” Will Morris, trader at the U.K.-based digital asset broker GlobalBlock, wrote in an email to CoinDesk.

Katie Stockton, managing partner at Fairlead Strategies, a technical research firm, wrote that immediate signs of upside price exhaustion still appear on the charts. However, an open above $58,859 on Saturday could invalidate the short-term exhaustion signal, identified using DeMARK indicators.

“If it is stopped out, we would expect a speedy follow-through to final resistance near $65K, and if the signal is left intact the implications would be for another week of consolidation,” Stockton wrote in an email to CoinDesk.

The SEC does not need to take formal action to approve the filings. Under federal law, applications can become effective if the SEC allows a mandated deadline to pass by without requesting changes or directing the aspiring issuer to pull the filing, wrote CoinDesk’s Danny Nelson.

The table below shows the odds of select ETF filings receiving SEC approval first, according to Bloomberg Intelligence. 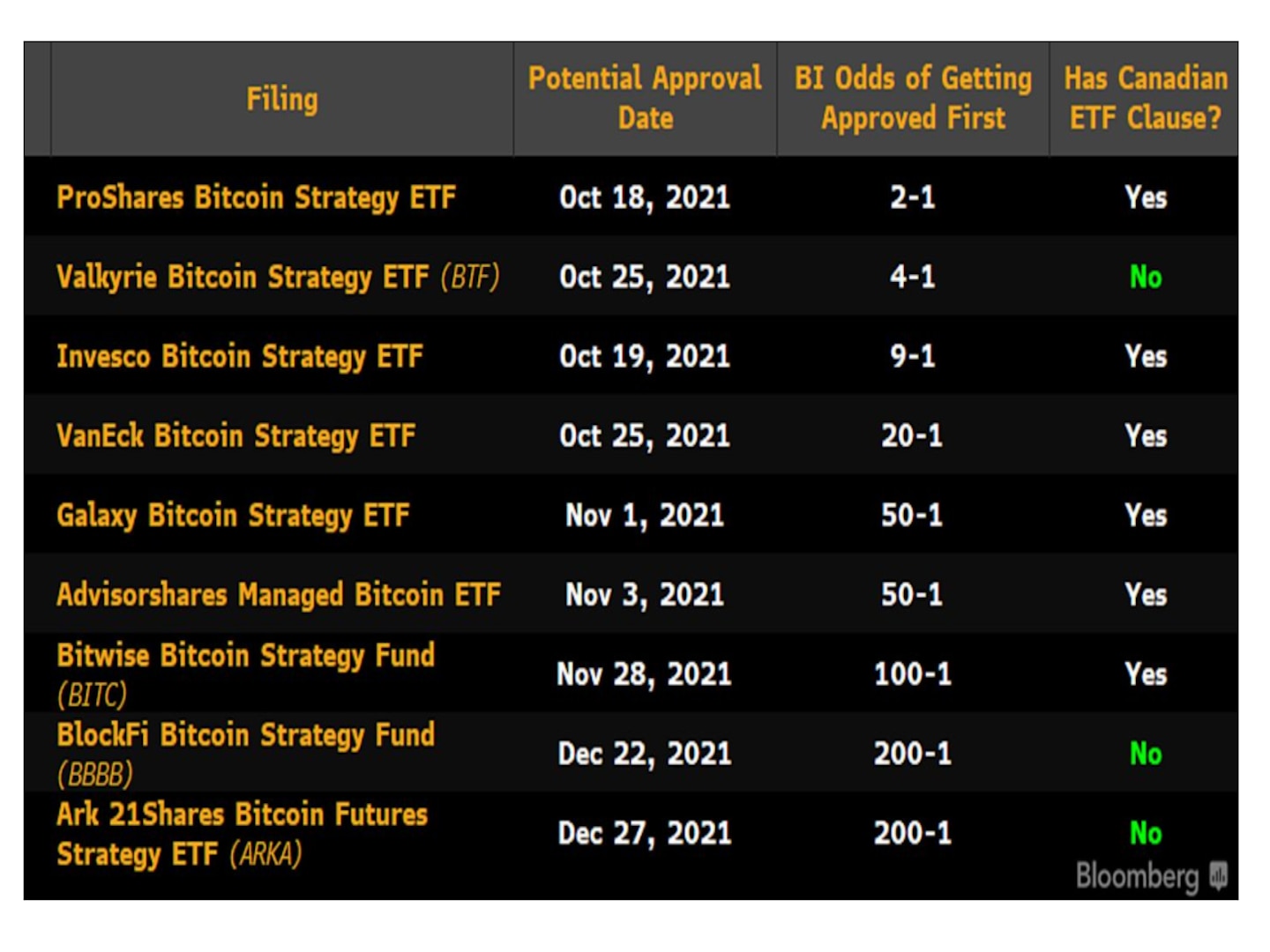 “If a futures-based ETF gets the green light, the door will finally open to retirement funds with assets in the trillions [of dollars], creating very favorable conditions for spot BTC to continue rallying,” Coinbase wrote in a newsletter to institutional clients on Friday.

“The next factor to consider is the time to launch and expected take-up from these ETFs. Sources close to the ETF business say that the time from approval to launch could be less than seven days,” Coinbase wrote, which means ETF buying by investors could occur in late October.

Generally, analysts anticipate more ETF products to be approved in the near future.

“Many in the investment products industry will now focus their attention on the ultimate ETF goal of bringing a spot-based product to market, a more cost-effective solution for consumers,” FundStrat, a global advisory firm, wrote in a Friday report.

The recent rise in bitcoin’s price also coincided with stabilization in equity markets. After a few days of decoupling from BTC’s rally, the S&P 500 has finally gained a footing, suggesting that investors’ appetite for risk remains strong.

The chart below shows the 90-day correlation between bitcoin and the S&P 500, which has risen over the past few months. 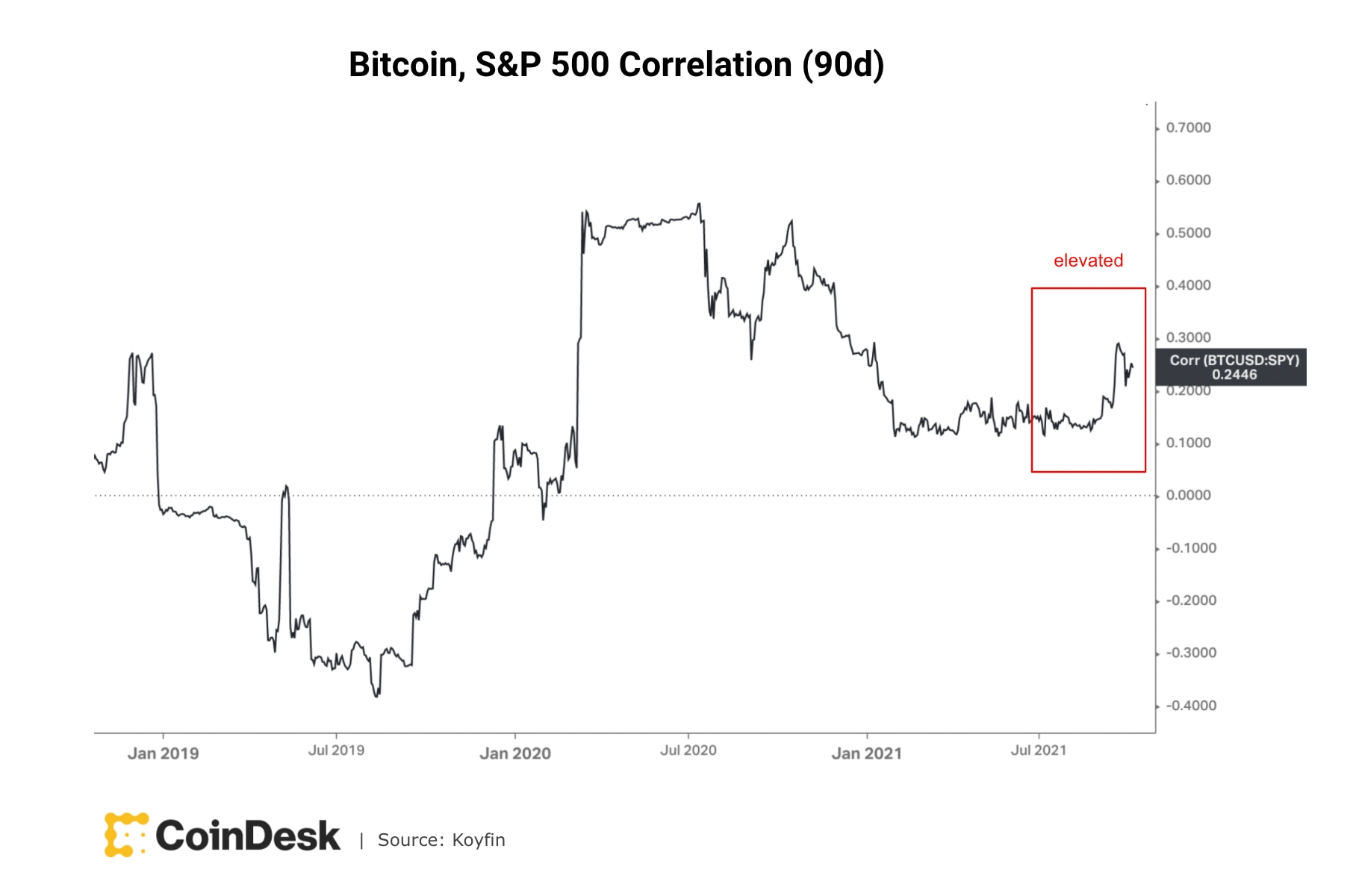 CFTC fines Tether and Bitfinex $42.5 million for “untrue or misleading” claims: The Commodity Futures Trading Commission (CFTC) fined sister companies Bitfinex and Tether more than $42 million on allegations the USDT stablecoin was not fully backed at all times and that Bitfinex violated a previous agency order, reported CoinDesk’s Nikhilesh De. According to a CFTC press release, Tether’s stablecoin was fully backed by reserves for only one-quarter of the time over a 26-month period between 2016 and 2018. Further, Tether commingled reserve funds with the company’s corporate funds and held reserves in non-cash products, the regulator said.DeFi game PoolTogether launches v4: Popular DeFi no-loss savings game PoolTogether has overhauled its architecture with the launch of its version 4, upgrading its win percentages for users, reported CoinDesk’s Andrew Thurman. PoolTogether’s new architecture allows for greater fractionalization of winnings – upwards of a thousand prizes from an earnings pool – giving smaller depositors a much higher chance of nabbing prizes. “Someone who had $1,000 right now into the USDC prize pool would have a 0.01% chance of winning a prize every week. That’s a less than 1% chance of winning a prize a year,” PoolTogether co-founder Leighton Cusack said. “With the new PoolTogether, someone with $1,000 deposited will have a 10% chance of winning a prize each week.”NuCypher, Polygon gain as tokens list on South Korean exchange: The Bank of Japan (BoJ) would try to develop a central bank digital currency (CBDC) that can easily coexist with private payment methods, reported CoinDesk’s Jamie Crawley. Seeking “vertical coexistence,” with other payment methods used by the public, a CBDC should be made of “relatively plain, easy-to-cook material,” BoJ Executive Director Shinichi Uchida said on Friday. Uchida added in his speech that the BoJ has “no plans to issue a CBDC at this time,” but that not issuing one would still leave the central bank with the task of building a payment system fit for the future.

Most digital assets in the CoinDesk 20 ended the day higher.