The Monero coin rising for three consecutive days, registered a 5% price rally. This bullish rally, backed by increasing volume activity, indicates the buyers are confident about gaining higher levels. With sustained buying, the altcoin should jump 6% to hit the $153 resistance. Can buyers breach this resistance zone, or there’s more for price correction?

The falling channel pattern carries the ongoing downfall in the XMR coin
The long-wick rejection at $170 indicates strong supply pressure
The intraday trading volume in Monero coin is $111.5 Million, indicating a 65.5% hike. 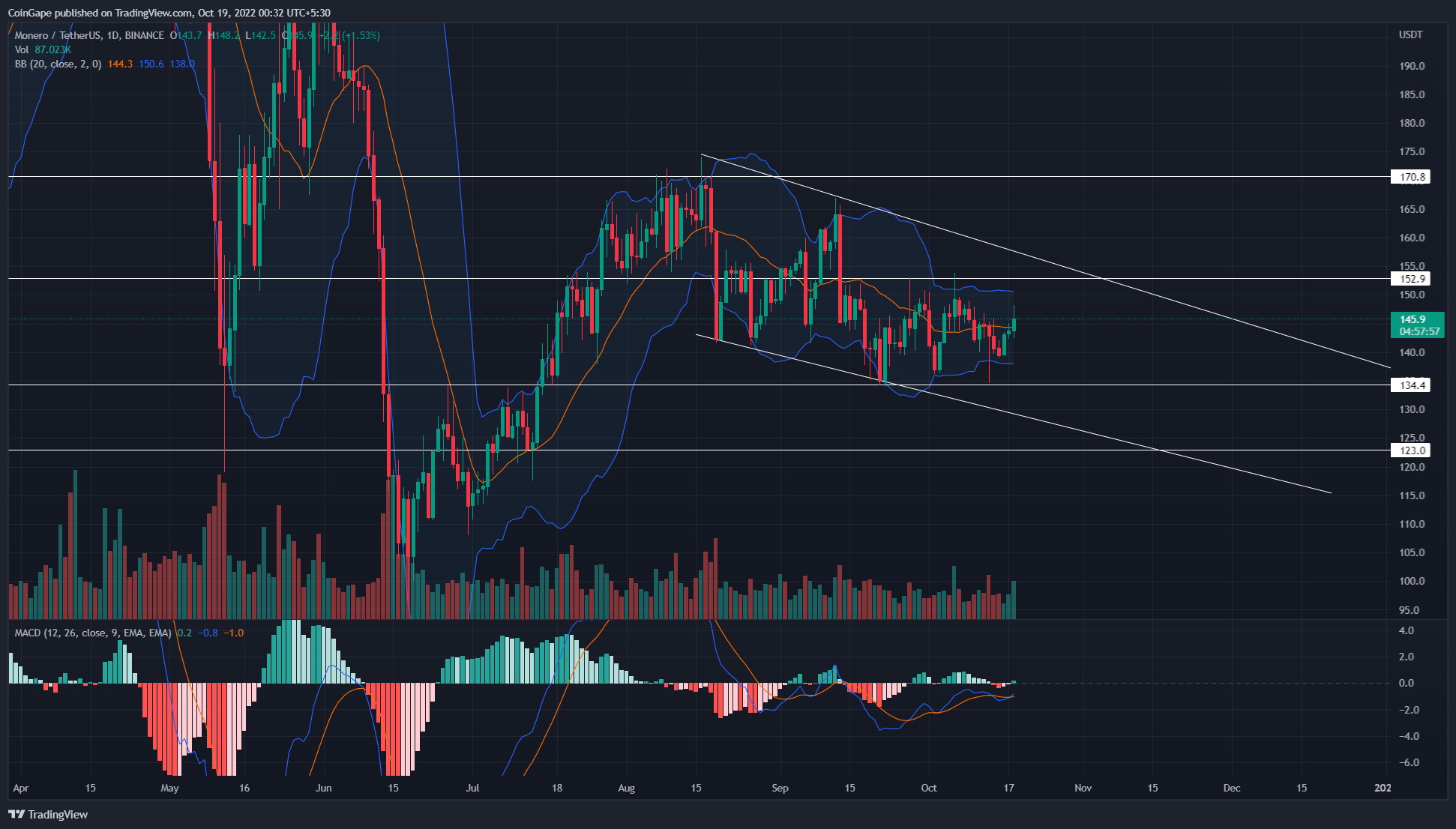 The Monero coin correction phase has halted at the $134.5 mark. The altcoin has bounced back from this support twice since last month, indicating that traders are actively buying at this dip. However, as the crypto market is still struggling with uncertainty, the coin price fails to rise above $151.8.

Furthermore, a set of lower highs and lower lows in the daily chart shows a parallel channel pattern formation. Though the pattern is leading to a steady downtrend, its true nature is to continue the prevailing bull run.

As of now, the Monero coin price trades at $147.9 with an intraday jump of 2.92%. Furthermore, a steady rise in volume activity indicates a sustained bullish rally, which should push the prices back to $152-$153 resistance.

The patterns resistance trendline resides at the aforementioned level, which should provide additional barriers against buyers. Thus, a possible reversal from this combined resistance will trigger a new bear cycle within this pattern.

However, in response to the channel pattern, the Monero coin should eventually breach the overhead trendline. Doing so will offer traders a long entry opportunity and a potential target of $171 mark.

Bollinger band: the coin price jump above the midline indicates the buyers are majorly influencing the ongoing price action. This development bolsters a bullish rally to $153 resistance.

MACD: a bullish crossover between the MACD and signal line gives additional confirmation for recovery theory.

From the past 5 years I working in Journalism. I follow the Blockchain & Cryptocurrency from last 3 years. I have written on a variety of different topics including fashion, beauty, entertainment, and finance. raech out to me at brian (at) coingape.com

The presented content may include the personal opinion of the author and is subject to market condition. Do your market research before investing in cryptocurrencies. The author or the publication does not hold any responsibility for your personal financial loss.