The Ethereum (ETH) price showcased more substantial gains than bitcoin this week, resulting in an upside breakout from the monthly consolidation phase. The last reversal from the $1000 bottom support surged four consecutive green candles and breached $1280 resistance. The expected retest may offer an entry opportunity to interested buyers.

The $1280 breakout foretells a 14.5% jump in ETH price
During the possible retest phase, a daily candlestick closing below $1280 would invalidate the bullish thesis
The intraday trading volume in Ethereum is $17.8 Billion, indicating an 8.6% gain 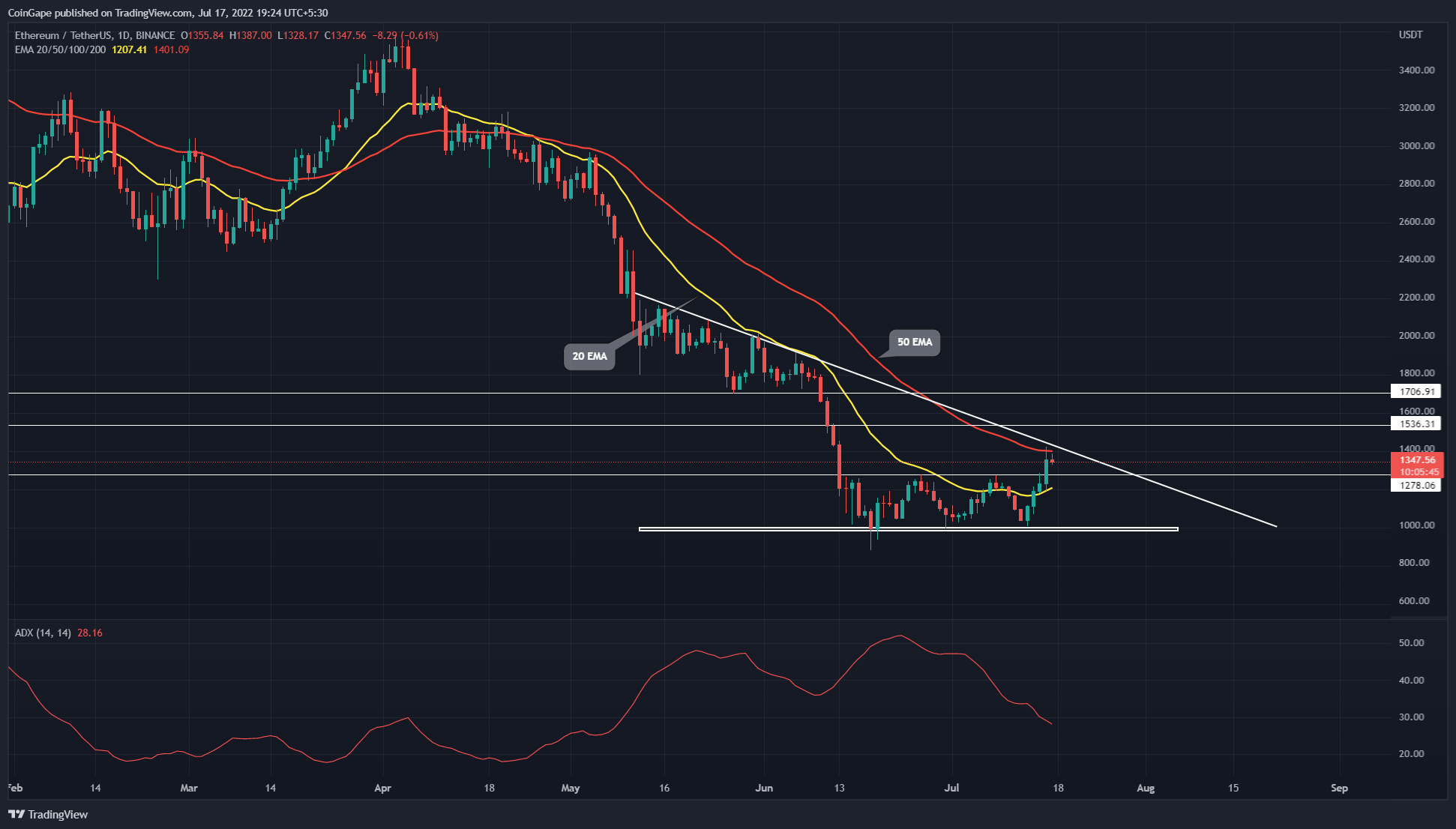 After spending weeks trapped within a consolidation range, ETH prices take a sharp bullish turnaround avoiding a significant drop under the $1000 mark.

On 13th June, ETH prices boomed 7.25%, resulting in the start of a bull run scouting for a price jump of 22.46% over the week. The increased demand results in the breakout of the overhead resistance of $1280.

However, the ETH prices take a rest at the 50-day SMA after breaching the 20-day SMA resulting in the formation of a long wick candle. The selling observed of the daily candle reflects the possibility of price retesting the broken resistance level of $1280.

Additionally, the resting phase comes under the influence of a resistance trendline that remains a major obstacle to bullish growth.

Hence, if the post-retest reversal from $1280 exceeds the resistance trendline, ETH traders can expect a jump to the next horizontal level of $1536.

In an otherwise situation, a drop under breach resistance can result in further continuation and a fall to the $1000 support level.

Vortex indicator: during the recent consolidation, the VI+ and VI- slopes showed multiple crossovers projecting uncertainty among the market participants. However, with the recent resistance breakout, the enlarged gap between the positively aligned lines reflects strong bullish momentum.

ADX indicator: since the early time of the coin’s range-bound rally, the ADX slope constantly lowers, indicating weakness in bearish momentum. Moreover, as sellers lose their grip over this, the buyers may maintain a steady recovery.

From the past 5 years I working in Journalism. I follow the Blockchain & Cryptocurrency from last 3 years. I have written on a variety of different topics including fashion, beauty, entertainment, and finance. raech out to me at brian (at) coingape.com

The presented content may include the personal opinion of the author and is subject to market condition. Do your market research before investing in cryptocurrencies. The author or the publication does not hold any responsibility for your personal financial loss.